Takeover Talk: So, now is it a done deal?

Share All sharing options for: Takeover Talk: So, now is it a done deal? 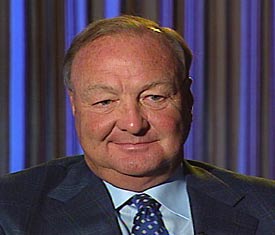 If The Guardian is to be believed - and who am I to question it? - George Gillett recently hooked Texas Rangers owner Tom Hicks into joining forces to buy Liverpool Football Club. Apparently, this is all going to happen fairly quickly.

1. There was always a (sometimes) unspoken uneasiness with the DIC ownership group. I think at one point I read something about Maktoum somehow being possibly implicated in a child slavery/indentured work type of thing. It sounded preposterous, but who knows? Maybe the English papers made it up. There was a hint of Chelsea-ness to the whole deal, which I always thought made people uneasy.
Advantage: Gillett/Hicks ownership

2. Tom Hicks bought the Rangers for $250 million. He would soon give Alex Rodriguez a contract worth $252 million. He's not afraid to spend money, but he doesn't exactly spend it with the greatest efficiency. He's taken an absolute thrashing for years about the Rodriguez contract, so will he be gunshy in consultation with Gillett when it comes to buying players?
Advantage: Their collective money holds promise, but let's hope they let Rafa handle the moves.

3. Again, if The Guardian is to be believed, Hicks came on board during the recent NHL All-Star Game when Gillett convinced the Dallas Stars owner among a crowd of literally tens that Liverpool was a smart purchase. This just sounds dodgy as all hell. I'm going on nothing more than gut instinct, but it seems odd. For example, when attending a sporting event, I usually do nothing grander with my money than convince a friend to join me in purchasing beer and some cheese fries. Usually we split the cheese fries.
Advantage: Luxury box owners

4. If I heard right, Hicks is along to ensure there is plenty of cash for the new stadium and to dismiss questions of a possible ground share with Everton. Good. Good for everyone.
Advantage: the Red side of the Mersey