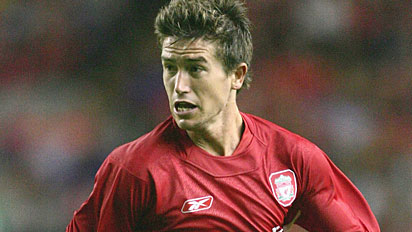 What would you think if you just read that headline? You'd think he's gone nuts, like he's imagining that little invisible elves are attacking him in his sleep causing the endless amount of injuries that have kept him off the pitch all season. You'd imagine that he thinks aliens are running LFC. You might even think he speaks in tongues and writes backwards and calls Robbie Fowler 'God'... Okay maybe that last bit isn't so insane, but this headline is really irresponsible. It makes Harry look mentally unstable, Rafa look like a dick, and worst of all, it makes teams interested in Kewell wonder if he's worth the bother. Other than getting people like me to read the article, what's the point? All Rafa was saying is that it's going to take some time for 'King Harry' to get back into top mental form and he doubts that could happen this season. I'm more disgusted than pissed off, I guess I shouldn't expect journalistic integrity when it comes to selling papers. My favorite part is 'Say Liverpool' in the title, as if LFC was calling Australia's favorite football playing son 'crazy.' Hell, everybody knows Australians are off their rockers, after all, that's where Mel Gibson grew up.