Share All sharing options for: Besiktas blown away | Liverpool 8 - Besiktas 0

Just as it was wrong to get too worked up about a couple of bad games in a row, we can't get too excited after one good result - especially as Besiktas were so utterly and completely woeful. After having an early chance skew into the side netting, we dominated the game.

An interception from Mascherano led to a through-ball from Voronin being deflected into Crouch's path. His shot, one-on-one with the keeper, was saved but it came back to the tall hit-man who calmly knocked it in. Voronin was involved in the second as well as he floated in a superb ball to Benayoun who controlled it, unmarked in the penalty area, and slammed it home.

The game was dead and buried by half time but credit to the players, they seemed to be in the mood to give the crowd a well-deserved show after some dire performances. Twice the Besiktas keeper saved but twice the ball came back to Benayoun and the little Israeli converted both chances to celebrate a hat-trick. 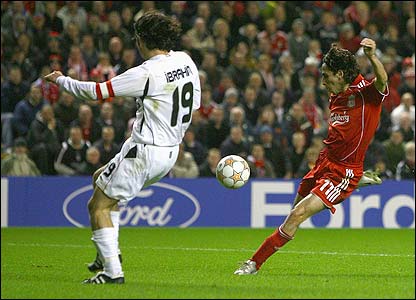 A much maligned Andriy Voronin played in Steven Gerrard mid way through the second half and skipper unleashed a thunderous shot past a hapless Hakan Arikan for a fifth - a goal that brought Gerrard one goal closer to his mate Michael Owen's European goals record.

After the fifth we saw Lucas, Babel and Harry Kewell come on and continue to search for goals. All three substitutes combined for the sixth - a fantastic ball from Lucas sent Kewell free and after good work down the left, the Australian found our hat-trick hero who put the ball back across the goal for Babel to apply an exquisite backheel for the finish.

Babel was on hand for a magnificent seven after a clearance hit him on the back and looped in over the keeper.

The players were clearly up for it and towards the end, Lucas, Babel and Riise had chances to make it eight (8) - Babel hitting the bar flush on when he could have had his hat-trick. The dutch tyro had the ball in the back of the net with a few minutes to go but he was harshly ruled offside.

With Kewell looking as menacing as he has done in his career, the team found its rhythm and Crouch scored the eighth following a Benayoun cross.

To be honest, Besiktas were lucky to get '0', they were that bad. However, one sour note from the night, in the other game in our group, Porto beat Marseille to leave the table looking like:

Objectively, every one of the seven goals we scored tonight made the loss in Turkey look like a worse and worse result. With Porto winning, we need to win both of our remaining games and hope Marseille or Porto slip up against Besiktas.

But eight goals - grabbed by out of form players - should be the starting point for a good run of form and with Fulham up next on Saturday, who's to say there isn't another big score on our horizon?