Preview: Liverpool away to West Ham OR 'What'll it be Mascherano?'

Share All sharing options for: Preview: Liverpool away to West Ham OR 'What'll it be Mascherano?' 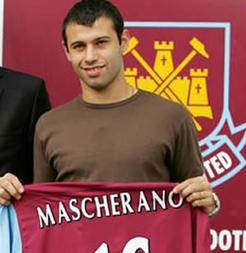 It seems like Aug. 31 was just yesterday when I learned of the unheard of transfer of Carlos Tevez and Javier Mascherano to West Ham and, while driving to work, talked to my Scouser friend here in Milwaukee about how the Hammers might now throw a big Upton Park kink into Liverpool's march to an easy Champions League place and possible title run during 2006-07. Now, Liverpool heads down to Upton Park today to face a West Ham side sitting 18th in the table, with a new manager and a star Argentina midfielder who has no future with that club.

As fate would have it, the guy wants his mail forwarded to Anfield. There's all sorts of FIFA mumbo jumbo holding up the move that, honestly, I just don't care about. My guess is, in the "flexibly ruled" world of football, this is going to happen, and I'd like to recommend a handy guide to learning the local tongue so Mascherano can adjust as quickly as possible. It's tough enough that he had to try and pick up simple cockney at the drop of a hat, so Liverpool should welcome him into their hearts and homes with a warm smile.

But what to make of today's match? Last year, this fixture saw a comfortable Liverpool victory and Luis Garcia and Hayden Mullins dismissed, ensuring both missed the legendary FA Cup final at Cardiff. There's much less tension in the air today, and I hope Rafa uses the FA Cup-free weekend (Thanks Arsenal, you bastards) to field a strong lineup and isn't worried about Saturday's Merseyside derby.

Other than that, there's not much reason to think the points are in danger today. Just go get 'em, boys.