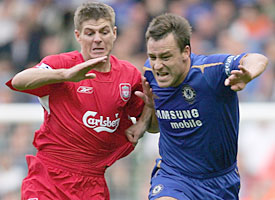 Look at how ugly John Terry is in that picture. I've always liked that shot of the two captains, Steven Gerrard and Terry, battling each other for positioning and the ball. But gawd, John Terry is an ugly, disgusting man. I am not a fan.

I'm not much of a tactical analyst - pass and move, pass and move; do the Liverpool groove being the extent of my expertise. But here goes:

Peter Cech got the medical all-clear from the doctors, so apparently his fractured skull is sufficiently healed. If he returns Saturday, and is relatively sharp, it's going to be much tougher than the prospects of pinging and fizzing shots at a net kept by Hilario. I didn't bother to check and see if Carlo Cudicini is healthy or anything because I can't stand Chelsea and it's poison on my eyes to look at their Web site.

If Cech is back, Liverpool will need something more than Jermaine Pennant lofting in mediocre crosses and hoping a weak Peter Crouch header can score one or two. I'd prefer to see Kuyt and Bellamy up front. Seeing as it's Chelsea, I sincerely doubt Rafa will repeat the 3-4-3 he unveiled at Watford last week. There's not much to say about Liverpool right now. They don't have their health, but I think it's actually a blessing in disguise that Luis Garcia is unavailable, as I'm sure Rafa would have selected him along the left in this match. Garcia hasn't been much at all this year, and I would have had little faith in his displaying a performance a la Juventus or Chelsea in the 04-05 European Cup run.

Also, apparently there's been some sort of conflict or something between Jose Mourinho and Abramovich lately. Anyone hear about this? I think I read it on a blog or something. I bet this story gets huge in the coming days, or something. Whatever, as long as Chelsea has Michael Essien out there, I'm worried. Liverpool isn't exactly rampaging on the pitch these days.

So how's that for a preview, 'eh? It's like the collected wisdoms of Bill Shankly, Jock Stein and Sir Alf Ramsey rolled into one, only better, because I'm alive - and brilliant. I'd like to leave you with one of our favorite pub songs for when Chelsea are on television. I'm going to keep it sanitized, but when you see the dashes, substitute a certain seven-letter word that starts with F and ends with I-N-G.