Share All sharing options for: Messi, why I oughta ... 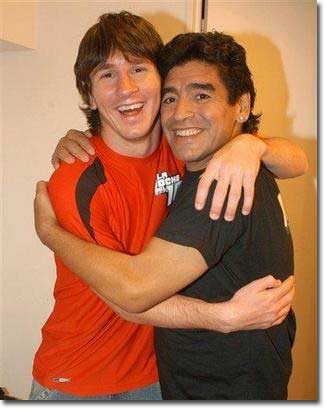 Photo: Lionel Messi and Argentina legend Diego Maradona embrace with joy at hearing Barcelona have drawn Liverpool in the Champions League round of 16.

Lord love liverpoolfc.tv, which I heard was voted Britain's best sports Web site of 2006 or something. the e-season ticket is brilliant, but the rah-rah mood goes from borderline embarassing to outright silly sometimes. Here's how a recent item starts:

"Barcelona winger Lionel Messi reckons Liverpool will be scared stiff going into their Champions League clash with the Spanish champions."

Whoa, that's some serious 19-year-old trash talk there, Lionel. What else do you have to say?

"Any rivals are dangerous in Europe at this time but Liverpool are a team that can be beaten by Barcelona. Lyon are the most difficult today," said Messi.

"Sincerely, I believe Liverpool are worried about playing against us because we are the champions of Europe and that strikes fear in any rivals.

Struck with fear?! Messi, you punk!

The Argentinean admits having a Spanish contingent could work in Liverpool's favour. He said: "The Reds are a peculiar team. They play in England but the style of the coach and many of the players is nearly Spanish. This will be an extra problem for Barcelona."

Wait, what was that there at the end? Liverpool "will be an extra problem for Barcelona" is what I think he said. Messi sort of has the dumb genius look about him. He strikes me as maybe being some kind of football savant – a god on the pitch and not much else off it. Regardless, Liverpool's Web site is going to have to twist quotes from a more eloquent Catalan resident than Messi if the team wants to whip the Kop into a frothing, frenzied mess.