Come on over bhoys! Let's have a drink

Share All sharing options for: Come on over bhoys! Let's have a drink 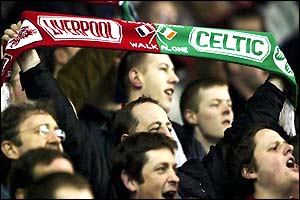 Before getting sidetracked by that Crouch to Newcastle rumor, I wanted to express my deep and sincere hope the Champions League draw this week pairs Liverpool with Celtic in the round of 16. I can think of no more fun European matchup for the Reds right now.

The cynics among you should not just consider it a desire from a Liverpool fan to avoid Barcelona (although that, heh, heh, would be a coincidental side benefit of the draw). No, going home-and-home with Celtic would be just about perfect in my eyes. The history, tradition, pride, closeness between the sides through the years – it's all there and ready to be enjoyed. Some UEFA oaf in a suit just needs to pick the right balls out of the hopper, or slips of paper out of the hat, or ... well, however it is they do it, they just need to do it.

If Celtic beat Liverpool, so be it. LFC fans would be really disappointed, but it wouldn't be as horrible as dropping out to Real Madrid or Inter Milan or anything like that. Hopefully, Liverpool would win, there'd be an exchange of "You'll Never Walk Alone" first at Parkhead and then back at Anfield after the second leg and everyone would go about their business.

I'm a hopeless romantic, but that's the outcome I'd prefer over all others.