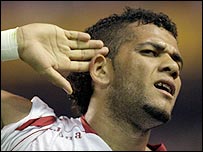 A commenter on the post about Carragher's goal got me thinking when he asked what great targets there are for Liverpool in the Janurary transfer window. After all, what good is a United Arab Emirate full of cash if there's nothing worthwhile to spend it on?

I posted a brief reply in a comment to that post, but I'd like to expand on it here. The guy to get - and the guy, unfortunately, it seems like Chelsea also really wants to buy - is Daniel Alves. Now, Google News is loaded with reports of Alves staying at Sevilla. However, I see nothing confirming a contract extension was signed. There's several reports that an extension would be signed within hours. Those are dated Dec. 8. Nothing since.

Hey, my Spanish is basically non-existent, and the Babel Fish Web translator looked a little off. Here's the December press releases from Sevilla. Take a crack at it if your Spanish is any good. Still, I don't see anything other than an announcement from the club that strikes me as a bargaining ploy to drive up the price.

Now, if my hunch is correct, then these rumors of interest from Barcelona and Chelsea will mean those big spenders will come in hard for Alves Jan. 1. So be it. If the DIC takeover moves along before the new year, Rafa has a chance to get in there and break out the checkbook. It didn't work in summer, when Liverpool offered £12 million. It's going to take more, but I'd argue Alves solves many LFC problems along the right side.

He tore apart Middlesbrough in the UEFA Cup final last year and he's an integral part of a Sevilla side that sits second in La Liga this season. Besides, Rafa has been the player's longest, most devoted pursuer, as this BBC account from the summer shows.

Alves wanted to come to Liverpool in the summer. The price couldn't be agreed. It's probably something like £17m or £18m now. That's stunning, but only because it's a price level Liverpool haven't been able to get itself involved in lately. With the Sheikh coming in, this is a range Liverpool should be expected to get involved in every once in a while. I think a strong, dynamic player like Alves would be a fairly safe splash to make for the new regime.

If Barcelona and Chelsea get inolved, maybe the price goes too high? I'd imagine anything at or above £20 million eliminates Liverpool. But Chelsea has its problems as a possible destination for a player. Fall out of favor with Mourinho and there's no playing time. It might scare him away. As for Barca, I can't imagine Sevilla would sell him to that side.

Of course, my Spanish could be so horrible that I've completely missed the announcement of his contract extension. Still, until that announcement is readily available, I think Alves is out there to be bought. Rafa should try for him if the DIC money comes through.